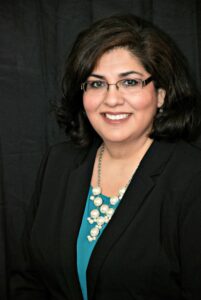 Monica is a proud seventh generation Arizonan who grew up in Glendale, Arizona. She attended public school in the Peoria Unified School District, and later attended both Glendale Community College and Phoenix College where she studied Criminal Justice and Paralegal Studies. While at GCC, she got her first taste of activism by learning voter outreach by becoming a voter registrar, became involved in MEChA and later served as Vice President.

Growing up, Monica’s parents stressed upon her the importance of hard work and a solid education. Her father was a local business owner and her mother returned to school to get her nursing degree. This taught Monica a strong work ethic and a proved to her that one is never too old to stop learning.

After spending time abroad with her husband when he was serving active duty in Marine Corps, Monica, and Marshall decided to return to Glendale to raise their sons. She was an active parent who volunteered her time to assist teachers in the classroom, on field trips and wherever she was needed. It was there that she saw the needs of the schools, the teachers and the students and wanted to make a difference not only for her children, but for all children in her community.

Being a public servant is a role that Monica takes very seriously. She takes an active role in participating in her community and local politics as she sees how the challenges directly affect the success of our community. She is a member of AZPOA, AFSCME Local 2960, Pride-at-Work Arizona, a MALF delegate, serves as Chair for the District 29 Democrats and was appointed by Supervisor Steve Gallardo to represent District 5 on the Maricopa County Employee Deferred Compensation Committee.

Since being elected to the Glendale Elementary School Board in 2016, Monica’s main focus is making sure all children have access to a quality education, regardless of economic status. She works to ensure every possible resource will be utilized to the fullest potential. In order to achieve that goal, Monica believes that educators are the most important tool to help our children succeed.

Contact us to see how you can positively impact your community!
LET'S GO!